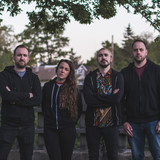 Guardrail is a band from Chicago, IL consisting of Kevin Andrew (vocals), Ken Ugel (guitar), Alyssa Laessig (bass, vocals), and Doug Brand (drums). The world's first DIET PUNK band. Basically, we’re not exactly “punk” in the traditional sense. But it’s definitely our biggest influence, and our music shows that. We’re here to sing happy songs about not-so-happy things, marinated in Jeppson's Malört and positive energy.   In June 2015, Guardrail released their debut EP Wordswords. After many lineup changes, the group was solidified in 2018 after releasing their latest EP Par at Best in 2017. With songs such as Miserable, Jane, and You're Fired; the band mixes punk, pop, and metal together for those who dig The Bouncing Souls, Sum 41, The Swellers, Strung Out, among others. In September 2020, Guardrail released new music in the form of a new EP 'Yikes'. Working with Open Your Ears Records and Nick Diener of the Swellers, this was a turning point for the band as they began to hone in their own sound. "Although the EP chronicles aspects of becoming an adult, we’re hoping all ages will be able to relate to the experience of having to start taking more responsibility for the state of the world, your mental health, etc. in a totally chaotic world. ...ultimately our generation is so much better than we’re given credit for, and we’re all here to support each other - and that really comes through in the last track." - Alyssa