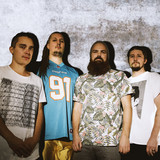 What do you get when the craziness of System of a Down meets the electronic mayhem of Enter Shikari wrapped in the production of Bring Me The Horizon? You get Awake Again. Awake Again is a four piece alternative metal band hailing from Turku, Finland formed in 2013. Their music a distinctive mixture of metal, post-hardcore and pop. Known for their huge and catchy songs accompanied with live performance like a nuclear bomb Awake Again has been making a steady rise in the Finnish metal scene. Having played over 100 shows the band has conquered smaller and bigger stages with their wildfire like energy. Most notably they won Wacken Metal Battle Finland in 2018 and got to show their alternative metal madness at the global finals in Wacken Open Air. Bigger, heavier and more melodic than ever before Awake Again is ready to conquer the hearts of music lovers around the world. New single RISE will be released on 8th of October 2021.