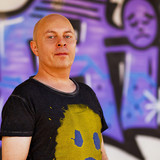 With 13 LPs under his belt, plus over three hundred EPs, with singles on such legendary labels as Harthouse, Superstition, Platipus, Hooj Choons, Yoshitoshi etc. he has been at the forefront of electronic music for almost 30 years and remixed everyone from stadium-filling acts like Faithless, The Human League, Moby, and Yello to the best up and coming producers in the underground scene. As a DJ, Oliver Lieb continues to rock some of the biggest clubs and festivals in the world. In 2018 he played at Luminosity Beach Festival