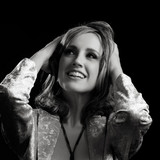 Emma Jo is a singer-songwriter based in Kansas City, Missouri. When she was twelve years old, Emma recorded a four-song demo entitled Girl, Guitar, Microphone. Over the next few years, her voice and songwriting matured, and at the age of fifteen, she recorded and released a full-length folk album, Waiting to be Heard. Reviewer Chip Withrow took note of her already-developed ability to write a strong hook, and calls the CD “a brave, bold statement; with just her voice and her guitar, [Emma] shows her talent and her potential.” Within a few months of the album’s release, Emma was ready to take the next big step in her career and put together a backing band. For the next six years, she performed with her band under various names, including Emma Jo and the Poets Down Here, the Poets Down Here, and (most notably) 49 Stones. The group released 3 full-length albums during their time together. The band parted ways in 2013, and Emma took a three-year hiatus from music. As a result, she holds a bachelor’s degree in history, which occasionally informs her performance style as she gives backstories and histories of the cover songs she plays. In 2016, Emma Jo relaunched her music career and is performing again as a solo-acoustic act. She performs originals and covers from the 1950s to today. Her sweet blend of country, rockabilly, and folk is irresistible to audiences of all ages.