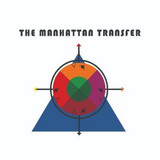 Riding a wave of nostalgia in the '70s, the Manhattan Transfer resurrected jazz trends from boogie-woogie to bop to vocalese in a slick, slightly commercial setting that balanced the group's close harmonies. Originally formed in 1969, the quartet recorded several albums of jazz standards as well as much material closer to R&B/pop. Still, they were easily the most popular jazz vocal group of their era, and the most talented of any since the heyday of Lambert, Hendricks & Ross during the early '60s. When the group was formed in the late '60s, however, the Manhattan Transfer was a hippie novelty act similar to the Lovin' Spoonful or Spanky & Our Gang. The lone LP that appeared from the original lineup -- leader Gene Pistilli plus Tim Hauser, Erin Dickins, Marty Nelson, and Pat Rosalia -- was Jukin', assembled by Capitol. Somewhat of a satire record, it was the last appearance on a Manhattan Transfer album for all of the above except Hauser. After Hauser met vocalists Laurel Masse and Janis Siegel in 1972, the trio re-formed the Manhattan Transfer later that year with the addition of Alan Paul. The group became popular after appearances at a few New York hot spots and recorded their own debut, an eponymous LP recorded with help from the jazz world (including Zoot Sims, Randy Brecker, Jon Faddis, and Mel Davis). Featuring vocalese covers of "Java Jive" and "Tuxedo Junction" as well as a Top 40 hit in the aggressive gospel tune "Operator," the album rejuvenated the field of vocalese (dormant since the mid-'60s) and made the quartet stars in the jazz community across Europe as well as America. The Manhattan Transfer's next two albums, Coming Out and Pastiche, minimized the jazz content in favor of covers from around the music community, from Nashville to Los Angeles to Motown. A single from Coming Out, the ballad "Chanson d'Amour," hit number one in Britain. Though Masse left in 1979 for a solo career, Cheryl Bentyne proved a capable replacement, and that same year, Extensions introduced their best-known song, "Birdland," the ode to bop written by Weather Report several years earlier. Throughout the '80s, the group balanced retreads from all aspects of American song. The 1981 LP Mecca for Moderns gained the Manhattan Transfer their first American Top Ten hit, with a cover of the Ad Libs' 1965 girl group classic "The Boy from New York City," but also included a version of Charlie Parker's "Confirmation" and a surreal, wordless tribute named "Kafka." (The album also earned the Manhattan Transfer honors as the first artist to receive Grammys in both the pop and jazz categories in the same year.) The production on virtually all these was susceptible to '80s slickness, and though the group harmonies were wonderful, all but the most open of listeners had trouble digesting the sheer variety of material. The group's 1985 tribute to vocal pioneer Jon Hendricks, titled Vocalese, marked a shift in the Manhattan Transfer's focus. Subsequent works managed to keep the concepts down to one per album, and the results were more consistent. Such records as 1987's Brasil, 1994's Tubby the Tuba (a children's record), 1995's Tonin' ('60s R&B), and 1997's Swing (pre-war swing) may not have found the group at their performance peak, but were much more easily understandable for what they were. The group stayed very active and concept-heavy during the 2000s, beginning with a tribute to Louis Armstrong for 2000's The Spirit of St. Louis. They included a pair of Rufus Wainwright songs among the jazz material on 2004's Vibrate, and released An Acapella Christmas the following year. The Symphony Sessions followed in 2006, offering re-recordings of some of their best-known songs with orchestral arrangements. In 2009, the Transfer saluted one of the biggest names in jazz with The Chick Corea Songbook, and featured contributions from Corea, Airto Moreira, Christian McBride, and Ronnie Cuber, among others. During the early 2010s, the group focused more on performing, although both Bentyne and Hauser were forced to find temporary replacements during medical procedures. After spinal surgery in 2013, Hauser returned to the group, but then died suddenly from cardiac arrest in October 2014. Following his death, vocalist Trist Curless of the a cappella group m-pact joined the group full-time. In 2018, the group returned with the eclectic studio album Junction, which they dedicated to Hauser. ~ John Bush, Rovi