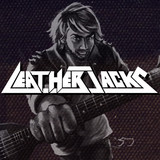 Original Awesome Hard Rock + Wild Riffs + 80s Nostalgia + Vocals | Guitars | Songwriting made by Mauro Cordeiro = Leatherjacks Founded in São Paulo, Brazil, in 2016. 2 Albums, 3 Singles and 1 Anniversary Re-Issue Edition for "Burning Wire". Check what Top Revewers are saying: "Leatherjacks a new band to me... But what a band, albeit a one man band founded in 2015 in Sao Paulo by Mauro Cordeiro. So he could be Brazil’s answer to Tom Scholz!

New Leatherjacks album Extremely Dangerous is the follow up to the 2017 debut release The Lost Arks of Rock and Roll both of which see Mauro write, sing, produce and play all of the music!" Dennis Jarman PlanetMosh "Listening to all three back to back Its easy to here where Mauro was heading with his musical direction. All in all, I’m quite pleased with what I’ve heard from Extremely Dangerous This is an album that covers all the bases for this listener. It’s got that 80s sensibility that I love, some wicked guitars and drums, and still maintain that great melodic sense in the vocals. For sure this is getting a big thumbs up from me, and a 9 out of 10 for sure. As I said before, this is not an album to skip by. This is a great piece of music and created by one man! You gotta give props where they are due for sure here!