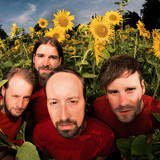 The songs on WASSERMANNS FIEBERTRAUM’s third record “MOSAIK” deal with various psychic, emotional and social experiences that define a human, influence him, create a mosaic that can fall apart and rearrange in a never ending process. “MOSAIK” is an adventure through Alternative, Post and Progressive Rock. After the debut LP “Brandung” (2012) and their concept ablum “Tauche die Welt in Farben” (2013) Wassermanns Fiebertraum add more vocals, electronic and percussive elements. They create a mixture of fragile, slowed down, but also powerful moments. Pop meets Experimental Rock music in an analogue sounddesign.In 2012 WASSERMANNS FIEBERTRAUM released their debut album “BRANDUNG” which was mastered by Olman Viper, who also worked with bands like Turbostaat and Caliban. They played shows with bands such as Light Bearer, Kokomo, A Whisper in the Noise and Lantlôs, spreading their music in Germany and Austria. In mid-december of 2013 the band released their second full-length album titled “TAUCHE DIE WELT IN FARBEN”, based on a concept story about a vivid, dreamy and curious little boy named Joschka who is fed up with monotonous daily life and likes to break with the habit. It was mixed in Los Angeles by Chris Common (Sargent House Studios), who also worked with Pelican, Mouth of the Architect and many more. In May 2014, WASSERMANNS FIEBERTRAUM joined Dornenreich and Heretoir on their tour through Germany, Austria and Switzerland.