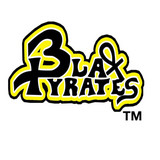 Originally, the award winning Independent Hip Hop/Soul group, Blaq Pyrates, was known as the Trapville Pyrates. It was founded by Fetty Cash aka Zodoq Banks, in 2003 and included his two brothers DaRuddOne aka Rasta Rudd & Primo Dollars The Blaq God aka Marty MacFly, along with cousin Koolgi Kid.

In 2007, due to the negative use of the word “trapping” and the bad connotation of the word “black”, the name was changed to the acronym: B.L.A.Q. P.Y.R.A.T.E.S., which stands for “Brothers Linked Amongst Qualifications Protect Your Riches Alias Through Extreme Status”.