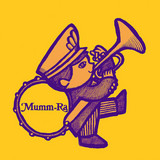 U.K. band Mumm-Ra (named after a ThunderCats character) is guitarist James "Tate" Arguile, bassist/vocalist Niall Buckler, lead vocalist/guitarist James "Noo" New, guitarist/vocalist Oli Frost, and drummer Gareth Jennings accompanied by live keyboardist Tommy B. The members formed the group while schoolmates, and early gigs frequently ended with extended jams with the crowd on-stage. Following a handful of EPs, the full-length These Things Move in Threes (guided by renowned producer Youth) was released in May 2007 by Columbia. Mumm-Ra's career was boosted when they were added to a tour with the Automatic, the View, and the Horrors in addition to outings with the Kooks and the Kaiser Chiefs. ~ Kenyon Hopkin, Rovi