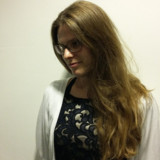 Yvet van der Tuin is a singer-songwriter who mainly focuses on vocals and piano. In her youth she was influenced by artists like Tori Amos and she grew up in a musical family between folk and cabaret. Later she was inspired by artists such as Agnes Obel. Her new album

Space & Time contains a varied selection of songs ranging from English, Dutch, wordless to intrumental. The