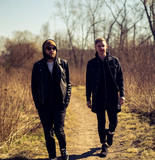 One might think that The Perfect Mess is just a band name, but the truth is… It’s a whole new era, the beginning of something bigger. The duo categorizes themselves in a self-made genre called "Lo-Fi Hi -Fi". You can describe the sound a little like taking old broken sounds and making them come alive in a modern vibe. For their upcoming album they worked together with producer/mixer Anders Lagerfors (Dark Tranquility, Pale Honey etc.). This collaboration holds a lot of curiosity and experience which equals in a large amount of unexpected sounds and stories. The band was formed 2014 in Skövde, Sweden by the lead vocalist and guitarist Niklas Bohm accompanied by drummer Mikko Viitala. The band recorded and released their first EP (Self-titled) in January 2015. Since then they have been working on their debut album “Magical Tragical”, which is due to be released in 2019. The first single of the album is called “Dead Beat”(released 28/7-17) and is a good overall snapshot of what to expect from the band in the future. Gmail: theperfectmessmusic@gmail.com