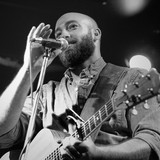 On his eleventh birthday in Somers, New York, Dan Zlotnick picked up his first guitar, a Squire Mini, and taught himself to play. His connection to the guitar and to the music he could make was instant, and it wasn’t long before he traded the Squire for a full-size Gibson SG. Obsessing over concert footage of Led Zeppelin, Stevie Ray Vaughan, and Bruce Springsteen, he honed his skills and looked for opportunities to share what he was learning. As the pony-tailed lead guitarist for his alternative high school rock band, Hot Soup, he performed covers and leapt into his career as a songwriter, crafting his first original pieces. Away at college on a baseball scholarship, Dan continued to play and write, developing and cultivating his upbeat, acoustic rock style. Between practices and games, he performed at coffee houses and fundraising events. After graduation, Dan traveled around the United States and Canada for three years as a professional baseball player, gigging in dive bars in Colorado, New Mexico, and Toronto, writing ballads from seats on bleachers and buses. In 2016, with his baseball career behind him, Dan recorded his self-titled debut EP. Just over a year later, he released 'Bumpers,' his first full-length album. With a contemporary Americana flair, Dan’s music reflects his love of classic rock and blues. His evocative lyrics, captivating melodies, and energetic performances exude Dan’s passion for creating and sharing his music with everyone around him.