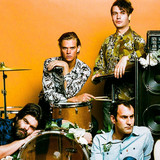 Originally known as Viet Cong before changing their name in 2015, Preoccupations play a clever, expressive fusion of art rock and lo-fi pop that maintains a very human pulse despite the extensive use of electronics and noise. The band was formed in 2012 by Matt Flegel and Scott Munro, two musicians from Calgary, Alberta, Canada. Flegel was a member of the celebrated Calgary indie rock band Women (who'd broken up several months prior), while Munro had formerly played guitar with Lab Coast. While touring Europe as part of Chad VanGaalen's backing band, Flegel and Munro began working up ideas for songs, and when they heard about the death of Women guitarist Christopher Reimer, they realized it was time to start a new project rather than waiting for something better to come along. With Munro on guitar and Flegel on bass, the two invited former Women drummer Mike Wallace to man the drum kit, and Danny Christiansen, who had worked with Flegel and Wallace in a Black Sabbath tribute act, came on board as guitarist. In 2013, they released a four-song cassette cleverly titled Cassette that they sold at their shows during a North American tour with Freak Heat Waves; two of the songs from the cassette were reissued as a single by the Canadian indie label Flemish Eye, and an expanded seven-song version of the tape was pressed as a 12" vinyl EP by Mexican Summer in the United States. In January 2015, Viet Cong released their self-titled debut album. Citing concerns that their name might be offensive to some listeners, that April the bandmembers announced they had changed their name to Preoccupations. Their first album under that name was another self-titled effort that appeared in September 2016. For their third album, 2018's bluntly titled New Material, the band recruited producer Justin Meldal-Johnson and took a more collaborative songwriting approach. ~ Mark Deming, Rovi