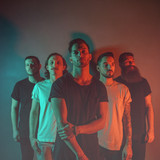 Levels is a djent influenced progressive metalcore band from Little Rock, Arkansas that was formed in late 2015. The band consists of Kolby Carignan, Dalton Kennerly, Jager Felice, Rob Mathews and Jacob Hubbard. Their influences derive from groups such as Volumes, Novelists, Veil Of Maya, and Architects. Levels strive to make their music stand out against other bands of similar genre thorough the use of emotion filled lyrics, catchy riffs and an energetic live performance that will leave you wanting more.