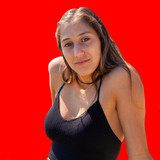 No filters, no Facetune, no Vsco, no makeup, no bullshit. What you see is what you get with 21-year-old singer-songwriter ROSIE. “I want to be transparent. Everything is exactly as it appears,” she says. “The scale of emotions that everyone feels is such a spectrum. The bad days are equally as important as the good days. Seeking to create a safe place online and through her music, ROSIE's willingness to get real struck a chord with millions. Her stripped back breakup ballad, “Never the 1”, amassed over 17 million views on TikTok highlighting Rosie’s songwriting prowess. The clever, heart wrenching lyrics and Rosie’s soothing vocal performance atop a gentle piano instrumental captivated an audience who’ve adopted the song for their own catharsis. The New York native has an uncanny ability to turn negative experiences like loss, betrayal, and criticism into jetpack fueled motivation. An, environmentalist, mental health advocate, guitarist, vocal producer, songwriter, and now major label recording artist, Rosie’s achievements come from her undaunted resilience - a retaliation against life’s harder realities. Raised in a musical family, Rosie began writing songs at age 12 and credits her parents and brother as her biggest supporters. Signing to Arista Records this fall, Rosie prepares for her next challenge - the release of her debut EP. Having written 90 songs for the project, it’s no telling where her insatiable resolve and open heart will take her next.