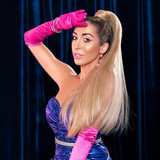 Billboard & American Top 40 Charting Myah Marie is a one-of-a kind Songwriter, Artist and Vocalist. She has amassed an outstanding 20 million + global spotify plays being a featured artist on tracks such as Ru Paul “Adrenaline”,

The Viral Tik-Tok sensation “LEGS” by Lucian Piane, Fancy Cars “Last Time Love” and many more. She is the songwriter and background vocalist behind many top artists such as Britney Spears (14+ songs), Lil Wayne, Miley Cyrus, Selena Gomez and is collaborating with a plethora of up & coming artists such as Erika Jayne of The Real Housewives (“How Many F**ks”), Hailee Steinfeld, AJ Mitchell (“No Plans”) and Digital Farm Animals (“Without You Now”) which have recently been released. As the lead singer of the band “My Crazy Girlfriend” (Capitol Records), she has toured across the country performing alongside noteable acts such as Charli XCX, Jason Derulo and Icona Pop. Currently, Myah is working on the next phase of her career which includes developing, coaching and collaborating with budding Artists careers as well as continuing to build her own unique sound.