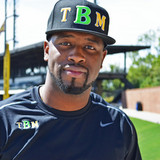 CJ Beatty is a native of Winston-Salem, North Carolina. His athletic accomplishments led him to be selected in the 2009 Major League Baseball Draft by the St. Louis Cardinals. From there he would soon become a hip/hop artist and motivator who specializes in teaching and inspiring people to believe in themselves when nobody else does. With hits like “Mr. I Don’t Bunt” and “Bad Umpire”, his YouTube channel has reached people in over 200 countries and continues to provide a source of inspiration for many. Since 2013, CJ has traveled around the United States, Switzerland, Canada, Dominican Republic and Australia delivering powerful messages. A few of his notable speakings include, Under Armor, Wake Forest University, ESPN, Cincinnati Reds, Chicago White Sox, AT&T and All-State. CJ is passionate and able to engage audiences with inspiring and motivating content. He speaks at conferences, workshops, youth and collegiate events. His life experiences and honed skills allow him to speak to a wide range of audiences by crossing age and cultural lines.