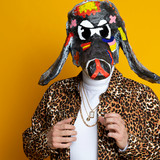 Yuri Runs is a producer and artist from Amsterdam. “While some folks laugh about the 90s, I take it bloody serious. The melodies, the beats and the hooks shaped my ears and heart!”  For years Yuri Runs made music without ever releasing it. Like many producers he struggled with the issue of being too critical on one side, and being simply scared on the other. Always telling yourself that it isn’t good enough doesn’t get you any step closer to your dreams. When he realized that, Yuri created his own world so he could create freely, produce without limits and write and sing without doubt. “If no one knows your face I can speak freely, and also the music speaks freely. I told myself to stop being a pussy, and be loyal to my dreams. Loyal, like a dog.” He now released 2 EP’s on the indie label Dirty Soul, the home of artists like Bakermat and AFSheen. That’s what gave him the confidence to stick keep working his way up straight from his bedroom-studio in Amsterdam. His latest single ‘Song For Batwa’ got reviewed by Dancing Astronaut as: “the kind of free spirited vibes we all could use right now.”  In August 2021 Yuri Runs will release the first song from his PARTY 90S STYLE EP. Songs like Now I Know What Love is, All I Want Is Everything and Let’s Go To Paris just ooze the nineties straight from the heart. While some people laugh about the 90s, Yuri takes it bloody serious.