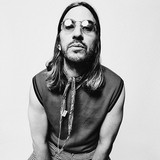 Most famous for his vocal contributions to hit singles by the Swedish House Mafia DJ collective, John Martin Lindström grew up in southern Stockholm.

Son of a rally driver, Lindström became interested in music at the age of 13 when he formed a Nirvana covers band with school friends. By 15 he was fronting a group which performed its own material, but soon became disillusioned with rock music -- and the band template in general -- after being signed and subsequently dropped by a label.