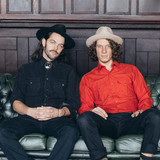 Their new single, 'Salt Dog (Howling For You) ' is taken from the forthcoming debut album ‘Heart of the Matter’, an album that was on the brink of collapse. With the band's biggest and first fully ticketed tour to date, and some of their most prestigious festival appearances all being cancelled with the impact of Covid-19, it wasn’t looking like it could be finished. Reaching out to their fans to help complete the album, a kickstarter campaign was started and an incredible amount of funds were raised. Just over £9k. This act of community kindness and belief from their fanbase instilled hope and drive to complete the album, and this is the first release from the album sessions.   True Strays are lifelong friends, songwriters and country boys - Joseph James and James Cameron - from Bristol, England who are fast carving out a niche of their own in the UK Americana scene. Their music is a cathartic celebration of alternative roots americana and blues rock.   Their songs focus on the dirt that life throws at you and how struggle can be transformed into something better. The prolific songwriting duo draw influences from classic sounds such as Neil Young, Muddy Waters, Fleetwood Mac and modern retro inspired acts like Alabama Shakes, Gary Clark Jr and the Black Keys.