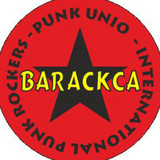 The Barackca punk rock band formed in 1993 in Budapest. Political songs already appeared in their early years alongside with the satirical ones, with the years the politically charged songs took over. They self-published a total of 7 albums. In their first 7 years they only performed in Hungary, after 2000 they held more and more gigs aboard and today they had over 700 concerts in 24 European and 4 Asian countries. Although they were a couple of member changes, but the current lineup is already stable 3 members for more than 22 years. In their songs they often criticize capitalism, point out social problems, and they hold racism, National Socialism and every repressive authority unacceptable.