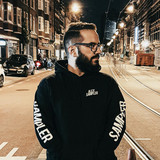 Alessio Pellegrini, known professionally as Alex Sampler was born in Isola del Liri, Italy on November 10, 1992. Alex Sampler grew up as a classically trained pianist and learned to play the guitar at an early age. He is a fresh electronic music project born after his debut under the alias Revolution DJ. Alex produces music in a multi-genres style, his main genres are Dubstep, Trap, and a melodic house style, he incorporates sounds of piano and guitar for a “hybrid of electric and organic” music style. and His career has been accompanied by the presence of various personalities from the world of club experience that allowed him to become a successful producer and DJ. In the early months of 2020, Alex released 2 new singles, his collaboration with Earl the Kid “World Trapped”, and his solo project “I Miss You”. Alex continued to release singles in early 2021, “Can’t get enough” a heavy trap production released on Tribal Trap, “Hype or Die” in collaboration with Earl the Kid released on Kinphonic and supported by Carbin, Felmax and Slander. In May he released 3 new singles, another collaboration, his friend Goozie, the track is called “Insanity” and is riddim dubstep, “Holding On” and “Moments”.