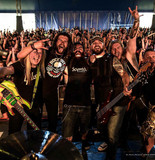 Hell’s Addiction are a 5-piece balls-out hard rock band from Leicester UK, described as the bastard child of an illicit three-way between Skid Row, early-Guns N’ Roses & AC/DC. On the 8th March 2019 released the V1.0 EP. Featuring four new tracks showing a different side and increased maturity in their song writing, it has received very strong r eviews from every quarter, both in the UK and Europe and the US. Within 48 hours of being released it had reached No.2 in the Amazon Rock Album Charts (only held back by the Queen Platinum Collection), No.1 in the Amazon Hot New Releases, No.1 in the Amazo n Digital Downloads Chart and No.7 on iTunes