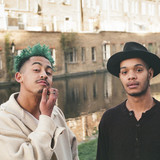 Responsible for bringing the flower power hip-hop sound of the late '80s back into the charts, Brighton duo Rizzle Kicks are one of the few successful male acts to emerge from the BRIT School that spawned the likes of Adele, Amy Winehouse, and Leona Lewis. Childhood friends Jordan "Rizzle" Stevens and Harley "Sylvester" Alexander-Sule first started making music together in 2008 on the Minor Breaches of Discipline mixtape, which saw the pair rapping over samples of tracks by Lily Allen, Gorillaz, and Arctic Monkeys. Compared to the likes of De La Soul and Dream Warriors, their laid-back production and humorous non-confrontational rhymes earned them a deal with Universal Records, and in 2011 they released their debut single, "Prophet (Better Watch It)," followed by "Down with the Trumpets," which eventually reached number eight in the U.K. charts. Following a guest appearance on X-Factor runner-up Olly Murs' chart-topping single "Heart Skips a Beat," support slots with Professor Green, the Streets, and Dizzee Rascal, and a remix of Ed Sheeran's "You Need Me, I Don't Need You," they were invited by Take That's Gary Barlow to appear in his Children in Need charity supergroup alongside the likes of N-Dubz, Wretch 32, and Ms. Dynamite. Following three MOBO nominations for Best Newcomer and U.K. Hip-Hop/Grime Act and Video, their debut album, Stereo Typical, was released at the end of 2011. The album Roaring 20s followed in 2013, featuring the singles "That's Classic" and "Lost Generation." ~ Jon O'Brien