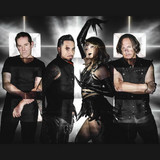 “Reality Suite is a bit of a New Jersey super-group. Their fusion of modern and classic rock is a fairly compelling mix since they really don’t sound like any other indie band I can think of,” declared Jim Testa - founder of Jersey Beat fanzine and contributing writer to Rolling Stone magazine. In September of 2015, the self-produced debut full length”Skinn” was released. A breath of fresh air to global modern rock fans, it was secretly a greatest hits album capitalizing on Reality Suite’s most popular songs from previous EPs. "Skinn boasts a number of standout tracks, including hook-laden first single, Die Dreaming, the equally infectious Save My Life and Playing with Fire and the propulsive Vegas Holiday" - commented the Record/Herald News reporter, Brian Aberback. The song Save My Life was featured as the Song of the Week in Steppin' Out, a NJ music publication. MPire Magazine declared, “Skinn is a damned near perfect piece of rock, one that incorporates the old and new in the right balance." In October 2016, Reality Suite released the single "Bury Me Alive." Leading music review website, Stereo Stickman stated: "It feels like an instant classic. They’ve brought back the things we loved the most about early 2000’s rock and pop-rock, and fused it effectively with this fresh and always addictive Reality Suite sound."