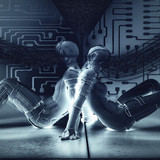 Gabriel and the Apocalypse

Featuring Gabriel and the Apocalypse

Hailing from the colorful, culture-rich streets of Minneapolis, Minnesota comes the unique sound of industrial rock outfit, Gabriel and the Apocalypse. The band delivers a chaotic, head-turning performance that drips with excess aggression, sex, and the female ferocity of frontwoman, Lindy Gabriel. Years ago, Lindy breathed life into this creature-of-a-project. With a few heavy-hitting albums, national tours, and a solid new lineup, it has since developed into a fully-fledged, national performing force that carries the old Industrial torch into the new generation. The band has spent the last few years cutting their teeth out on the road, getting the spins from doing figure-8s across the US interstate system with bands like Wednesday 13, American Head Charge, Flaw, Mushroomhead, and Lords of Acid. Within this circuit, they have become known for their intense energy on-stage as well as their dedicated professionalism with fans, venue staff, and tour mates. Off the stage GATA is known for the extraordinary production of music videos and digital media. Praised as “visually stunning,” the band boasts a number of high-quality videos for hits like “Thrill of the Kill,” “Behind the Sun,” “Electro Mechanical,” and their rendition of the 1987 Midnight Oil No.1 single, “Beds are Burning". Band Members: Lindy Gabriel – Vocals Jake LaCore – Guitar/Bass Figgles McGee – Keys/Samples Zach Williams – Drums Joey Connelly - Guitar