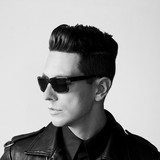 As the legend of Cobra Starship would have it, frontman Gabe Saporta fled into the deserts of Arizona one day to find the true meaning of his existence away from his emo-rock band, Midtown. Saporta spent days and nights pondering life, mysterious lights constantly plaguing the nighttime sky above him. One distinct night, the lights became so mesmerizing that Gabe became catatonic and started levitating into the air. A snake suddenly came out of nowhere, bit his neck, and he awoke to find a talking cobra from the future nursing his wounds. This enigmatic cobra went on to explain the end of the world (no salvation for anyone) and disclosed Gabe's purpose in life -- to ensure that mankind went out in style. As the cobra revealed, Gabe must complete this "by teaching hipsters to not take themselves so seriously and by telling emo kids to stop being pussies." Hence, Cobra Starship were born...uh, back in New York. After taking their name from words written on the back of Saporta's favorite vintage jacket, the band burst onto the scene with an über-catchy dance-pop-rock single named "Snakes on a Plane (Bring It)." The song -- which featured Saporta performing alongside fellow vocalists Maja Ivarsson (the Sounds), Travis McCoy (Gym Class Heroes), and William Beckett (the Academy Is...) -- was the lead track off the 2006 soundtrack to Snakes on a Plane, a horror comedy starring Samuel L. Jackson. Its video hit the MTV airwaves that July and featured cameos from Jackson and Fall Out Boy's Pete Wentz. Meanwhile, Cobra Starship continued work on a full-length album of their own. The band signed to Decaydance that same year and spent part of the fall touring with Gym Class Heroes. While the City Sleeps, We Rule the Streets hit stores that October, marking the band's official debut, and Saporta continued to tour alongside his newly expanded band. After several changes, the lineup returned in 2007 with ¡Viva la Cobra!, followed two years later by Hot Mess. The latter album was preceded by "Good Girls Gone Bad," a Top 40 hit co-penned by Kara DioGuardi and sung by Saporta and Gossip Girl actress Leighton Meester. The band kept the party going in 2011 with the release of their fourth album, Night Shades, which spawned a top 10 hit with "You Make Me Feel." After taking some time off working on life and other projects, the band came back in late summer of 2014 with a single, "Never Been in Love," which featured vocals by Icona Pop and the piano sample from Fatboy Slim's "Praise You." ~ Corey Apar