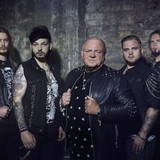 A German heavy metal outfit founded and fronted by powerhouse vocalist Udo Dirkschneider, U.D.O. emerged in the late '80s after Dirkschneider exited the popular power metal group Accept. Beginning with 1987's Animal House, Dirkschneider and a rotating cast of players carved out a huge swath of heavy metal real estate, averaging a full-length LP every year or so (2018's Steelfactory was the group's 16th full-length effort) and touring on the strength of an impressive catalog of European power metal that also included Accept classics like "Balls to the Wall" and "Fast as a Shark." Following his departure from Accept in 1987, Dirkschneider formed U.D.O. with guitarists Peter Szigeti and Mathias Dieth, bassist Frank Rittel, and drummer Tomas Franke. The group's debut album, Animal House, was in fact written by Dirkschneider's former bandmates in Accept, and by the time of its 1988 follow-up Mean Machine, Szigeti, Rittel, and Franke had all been dismissed, replaced by guitarist Andy Susemihl, bassist Thomas Smuszynski, and drummer Stefan Schwarzmann. Susemihl himself was out of U.D.O. for 1990's Faceless World, replaced by guitarist Wolla Böhm; the same roster who recorded 1991's Time Bomb, although the band split in the wake of a subsequent tour, with Dirkschneider rejoining Accept from 1992 to 1996. He re-formed U.D.O. with Dieth, Schwarzmann, guitarist Stefan Kaufmann, and bassist Michael Voss to contribute a track to the Judas Priest tribute album Legends of Metal; only Schwarzmann and Kaufmann remained on board for 1997's full-length Solid, which featured new guitarist Jürgen Graf-Biardi and bassist Fitty Wienhold. No Limits followed a year later, and in 1999 U.D.O. resurfaced with the punishing Holy, which saw the group delivering their most visceral LP in years. 2002's Man and Machine featured the hit "Dancing with an Angel," a duet with Warlock vocalist Doro Pesch, and was followed by a string of hard-hitting studio albums: Thunderball (2004), Mission No. X (2005), Mastercutor (2007), Dominator (2009), and Rev-Raptor (2011). The following year saw the departure of guitarist Stefan Kaufmann, who had to leave the fold for health reasons. He was replaced by Andrey Smirnov, who made his first studio appearance with the group on 2013's Steelhammer. Decadent, the band's 15th long-player, arrived in a timely fashion in early 2015. Later that year, Dirkschneider announced that he would be embarking on a massive tour comprising only Accept songs, with the intention of retiring the material. A double-live LP, Back to the Roots: Accepted, chronicled the tour in 2017. U.D.O. returned with their 18th studio long-player Steelfactory in 2018; two years later they released the follow-up We Are One, an orchestral album written and recorded in collaboration with the Concert Band of the German Armed Forces. ~ Jason Ankeny, Rovi