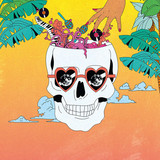 Inspired by both legendary French chanteurs and the sounds of their African heritage, Zoufris Maracas are an eclectic world music outfit who rose to fame with their humorous and poetic take on a wide range of social and political issues. Named after the group of Algerian workers who immigrated to France in the second half of the 20th century, founders Vin and Micho met at age 15 and soon after traveled together across West Africa, performing the songs of Jacques Brel and Georges Brassens on a four-string guitar. After going their separate ways, they regrouped in 2007 to begin busking on the streets of Paris, where they were discovered by producer Francois Causse (who later joined the duo on drums). Following the recruitment of trumpeter Brice and gypsy guitarist Mike, they released their debut album, Prison Doree, in 2012. ~ Jon O'Brien, Rovi