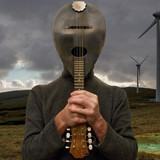 Mister Salmon is a performative identity created in 2010, with which to explore the paradoxes of a human-animal, northern-English life, in songs and music. The songs have pared-down lyrics adapting the grammar of poetry and folk song, but they do not express the aspirations of any particular “volk”. Arrangements feature a both conventional and artist-created instruments, filtered through a sensibility used to audio art and soundtrack composition.

Mister Salmon Cries Out (2020) comprises three tracks. Curlew was first shouted into the wind on a beach in Ireland, but is also about a place near Sheffield, England. Curlew and its companion song Nature Trail are ballads for the anthropocene, about projecting ideas onto the natural world, even as human overreach is being reappraised. The album Mister Salmon ...in Yorkshirama (2010) is structured like a fragmentary movie of a life lived in 1970s and 80s northern Britain, and treats the idea of belonging to a particular place with ambivalence. “Mister Salmon” recordings are released on the Salmon Songs label, alongside works under the artist’s real name: Andrew Stones.