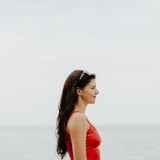 Lynne[a] (Lynnea Malley) is a singer/songwriter, producer, YouTuber, and artist in Chicago, IL.   A heartbroken young Lynne[a] began her official journey with music in Omaha, NE when she failed to make her school's 4th Grade Honor Choir, and her mom suggested she, "stop crying and just join a real children's chorus."   Children's chorus quickly became private voice lessons and high school show choir. Following high school, Lynne[a] began classical music studies at Loyola University Chicago, until summers of study with Berklee College of Music convinced her to adjust her focus to modern music at Columbia College Chicago, where she earned a BA in Contemporary, Urban & Popular Music. Post-graduation, an internship at Rax Trax Recording Studio cultivated her interest in music production, encouraging her enrollment in an online program with Berklee for a Professional Certificate in Music Production.   In 2011, halfway through this turbulent tale of Lynne[a]'s musical education, she uploaded her first original song, "The Facebook Song", to YouTube. The video acquired roughly half a million views. Through this, she established something of an internet fanbase for whom she continues to create.   Lynne[a]'s first original EP, Disjointed, was released in 2014, followed by an original LP in 2016, If I Take off My Shirt Will You Listen to My Music. A new EP, You Know You Felt., is now available to listeners as of 4/4/18.   Learn more at lynneamalley.com