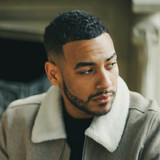 At only 27 years old Josh Daniel has had a whirlwind career and racked up over 1 Billion hits on YouTube. Josh gained international recognition and media coverage from his X Factor audition where he reduced Simon Cowell to tears and became the stand out star of the ITV show, charting his audition song at #2 in the UK Charts and trending virally round the world which would see him catch the attention of Chris Brown & many other celebrity supporters. Josh has just returned from a UK wide tour with Soul legend Beverley Knight, has performed at the Mobo Awards Preshow and is currently working on new music alongside producers and writers from Roc Nation, Sony ATV & Warner Chappell to name a few. Josh was also the songwriter and voice behind the soundtrack for 2020 Netflix series 'The World Of The Married', which peaked at #10 on Netflix globally. Dubbed by UK media as 'pop's new gentleman' and one of 'music's rising stars', 2021 looks promising to be huge for Josh Daniel, with a brand new project on the way.