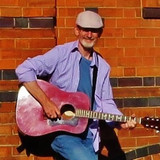 Irish-born, folk & country music singer, songwriter and guitarist, Owen Moore is a very familiar face in country music venues and folk clubs around the south coast of England. A journeyman veteran of the country music & folk music scenes, Owen plays regularly in bands and duos and also occasionally appears as a solo performer. His music is widely available across the internet and he can often be seen and heard playing Live in small-town squares and big-city high streets around the south, as he is an inveterate busker and street performer too. Over the past few years Owen has developed into a writer of novel country music and folk-style songs with interesting themes, intriguing words and catchy tunes. His original songs have featured on folk and country music radio shows in the U.K., Ireland, France, Germany, Scandinavia, Italy, Australia, New Zealand and in the U.S.A.