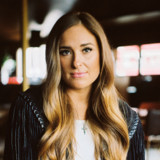 Rootsy bluegrass, playful rockabilly and gritty folk have been cooked up together and garnished with a modern twist. Kayley Hill’s sound has been compared to Jewel, Dolly Parton, and Patty Griffin while staying current to the times of country music. She loves blending the old with the new, finding inspiration from the artists who trail-blazed country music of the past. Keith Urban has described her voice as a “gumbo of Celine Dion, Natalie Maines and Jewel”, due to the pureness in her tone and her experienced vocal control and stamina.

Raised in Bristol, TN, Kayley has stuck close to her roots within her music and shared that background with every audience she comes across. She’s played notable stages across the world, including the Tennessee Performing Arts Center, the Lyric Oxford, and Loveless Cafe, and has studied closely with both Grammy and Tony award winning songwriters, upon completing her education at The Boston Conservatory at Berklee.