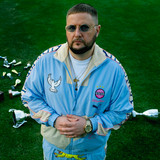 Boss Spieler University is to be released July 9, 2021 on Brenk Sinatra’s new founded Label Wave Planet Records. Musical off-season is over now, because Brenk Sinatra opens the summer semester at his Boss Spieler University. It continues Summer 2019’s sequel of the Midnight Ride series seamlessly. It’s no coincidence that the album is to be released during the summertime, as it is heavily inspired by a Dirty South flavor of the 1990s, well brought into the year 2021 by Brenk. Which sound could fit a hot, hopefully post-pandemic summer better?