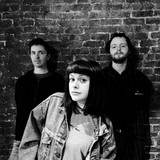 New York's A Very Special Episode is the result of musical self-discovery in a small upstate town without tastemakers. Growing up, high school friends Kasey Heisler (vocals, bass) and Patrick Porter (guitar) cut their teeth on whatever records they could get their hands on. By the time they moved to Queens in 2015, the duo had a handful of songs under their belt. After finding success at a small house show the following year, the duo decided to officially kick AVSE into gear. They self-released their debut EP, Censored Dreams, in June of 2017. After several lineup changes and becoming active participants in New York’s underground scene, the group (now a trio with drummer Chayse Schutter) signed to Knuckle Down Records in 2018 to put out their sophomore EP, Cut For Time. The release served as an atmospheric take on gender politics, introspective growth, and the ever changing environment of a city so big. The band’s eclectic sound, energetic live shows, and frequent presence in the artist community have allowed them to perform in various cities throughout the Eastern US with acts such as The Rizzos, The Black Black, Powersnap, Tiger Castle, and the Hell Yeah Babies.