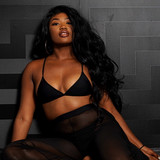 Geron’s musical beginnings stay alive on her parents’ VHS tapes. Since a toddler, she’s been singing and dancing. By Kindergarten, she was playing piano and her first recital followed a couple years later. At age nine, she became a soloist in the church choir, and eventually took vocal lessons. When the lessons ended, she continued playing and singing. Then in high school, she told her mom she wanted to pursue a career in music. By Kindergarten, Geron was already playing piano. Her first performance in a recital came just two years later. She performed as a soloist in her church choir in Georgia by nine years old. She is classically trained as a vocalist. An avid songwriter, Geron enjoys speaking openly about her personal life in her music. Songs by Geron tend toward the introspective, the genuine, and the autobiographical. She has gone on record to state that the three-decade-strong marriage of her parents “has influenced [her] greatly.” “Some of her songs weave a tale about the dark side of relationships, too, though,” says Bergeron Musique, “and her lyrics often have complex or dual meanings.” Geron cites as main musical influences Whitney Houston, Mariah Carey, and Christina Aguilera. As such, her own style often moves between the pop and hip hop genres. Geron's vocal tones have been described as “unique, with a serious, soulful, and mysterious quality that lends itself to alternative R&B.”