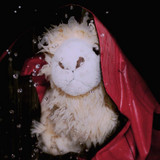 Born Humphrey Louis Grarecalfran on November 8, 2013 in London, United Kingdom. Growing up in London, Humphrey was inspired by the many sounds that surrounded him.

His love for creativity led him to attend theatre school, where he studied for 3 years. While at school, a passion to make music grew inside of him, and by the September of 2015, Humphrey was ready to release his debut album, Ridin The Llama on Soundcloud. Following the success of RTL, Humphrey went on to release three more albums, with his fourth and final musical album, Phoenix, released in July 2017.