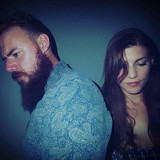 Bio Since forming in 2016, Fremantle based Troubadours Kings and Queens weave effortless celtic infused harmonies with rich Appalachian inspired guitar riffs to create a unique sound which is both raw and haunting, they are quickly establishing themselves as one of Australia's busiest and exciting folk duos. 2018 saw couple Kaleisha Dutton and Richard Glover play over 100 shows, developing a name for themselves with their honest and intimate performances across both Australia and the UK. Their debut single 'Cries of the Fallen', is a ghost story which tells the tale of a man coming face to face with death, the fear and isolation that takes over him as he feels deaths 'touch', the song, which Glover states was heavily inspired by both Grimm fairy tales and Dante's Inferno, won 'Song of the Year' by 89.7FMs Western.Oz show. Since the launch of their self titled album, Kings and Queens have gone to release two other singles, including a Christmas song 'Turn the Page', and 'The King of Salem' which is set to be the opening song to their follow up album and is "a ballad of human history, focusing on both the good and bad that we are capable of and how we, as individuals can impact the world". Walking the line between traditional British Folk and Americana, Kings and Queens will take you on a journey through life, death and the journey in between.