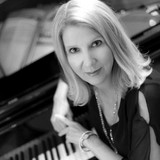 Robin Meloy Goldsby's solo piano career has taken her from Pittsburgh to posh New York City venues and exclusive resorts, and on to the European castles and concert stages where she now performs. Robin, a Steinway Artist, has seven recordings to her name and has appeared in the USA on National Public Radio’s All Things Considered and Piano Jazz with Marian McPartland.

Currently, Robin is the featured pianist at the Excelsior Hotel Ernst in Cologne, Germany. Her newest recording, Home and Away, launched on November 26th, 2017. Ms. Goldsby often serves as a cultural ambassador for European organizations dedicated to transatlantic relations. She has performed her original music for German Chancellor Angela Merkel (Atlantik Brücke, e.V ); for numerous U.S. Consulates in Europe; for Amerika Haus, e.V. NRW; for Steinway in New York, Berlin, Oslo, Düsseldorf, and Vienna; and for the Federation of American Women’s Clubs Overseas (FAWCO) worldwide. In 2014 Goldsby and her daughter, Julia, wrote and performed the theme song, “Maybe It’s You,” for the NGO International Women’s Forum at the United Nations in Geneva. In November 2017, she was invited to perform her original piano compositions