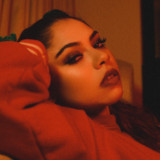 Pop-oriented R&B songwriter and singer Mickey Shiloh started composing songs at the age of 12 and within two years uploaded her first recordings. She connected with producer Chad Dexter through MySpace shortly thereafter, and made her first major appearance on Twista's 2009 track "Jump Off." The same year, the Bay Area native signed a publishing deal with Rodney "Darkchild" Jerkins and co-wrote Janet Jackson's disco throwback "Make Me," a number one hit on Billboard's Hot Club Dance Songs chart. Shiloh stacked credits over the next few years by working with the likes of Shontelle, Britney Spears, Pitbull, and LL Cool J. In 2015, she reached another milestone by co-writing Janet Jackson's "Night" with Jackson and songwriting/production legends Jimmy Jam and Terry Lewis. "Drunk on the Mic," recorded with Shamtrax, was uploaded to her SoundCloud page that November and won her a new set of fans when reality television star Kylie Jenner tipped off her Snapchat followers to the candid track -- the first verse of which Shiloh sang off the top of her head. "Drunk on the Mic," was given an official, independent release in January 2016 ~ Andy Kellman