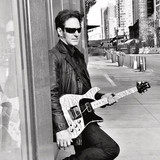 Dave Fields Ferocious blues rock & beyond NYC Style New York Blues Hall Of Fame inductee AND Fodera Guitars artist Dave Fields performs all over the US and the world. He is currently #1 on the ReverbNation blues charts in NYC. His awards include: Best Self Produced CD 2006 at the IBC, 2009-2010 Mojo Boogie Award, 2012 international blues magazine Big City Blues Happy To Have The Blues Lifetime Achievement Award. Legendary British bluesman John Mayall recorded one of Dave’s songs, “Train to My Heart” on his CD “TOUGH”. Dave’s CD’s TIME’S A WASTIN’, ALL WOUND UP, DETONATION (produced by legendary Grammy award winning producer David Z), ALL IN and UNLEASHED have all garnered international acclaim. Dave is overseas regularly with tours in Europe. Dave grew up in New York City the son of a noted composer arranger producer Sammy “Forever” Fields. From the time Dave was young he grew up in his father’s recording studio being exposed to the best NYC studio musicians of the time and artists such as the likes of Sammy Kahn, Rupert Holmes and Stevie Wonder. After attending Berklee College of music, Dave was immersed in the NYC music scene as a composer/arranger/producer & first call guitarist/multi instrumentalist. Dave’s father made sure Dave was well schooled in not just the blues but also every style of music. Growing up in NYC exposed Dave to a “smorgasbord” of different music and instruments, piano being Dave’s first instrument.