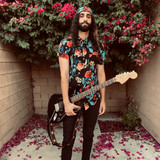 Jason Masoud has been a professional musician for 4 years. He started playing when he was 12 years old and after taking a 2 year break from music from ages 17-19, he came back swinging at 19 and started developing his true skills for the craft. He has now played with many different bands ranging from genres of R&B, Funk, Rock, Hip-Hop and Jazz. He has also gone on tour playing in California, Utah, Colorado, Oregon, Washington and Nevada. Jason Masoud started a project called "Stories of the Sun" his debut EP that was written with no-one but his younger sister in mind. On May 4th 2019 Jason lost his beautiful sister to a rare, extremely aggressive cancer. His sister Rana Masoud was his biggest fan and was the person who pushed him to get back into music after his 2 year break. Once he lost his sister, he felt hopeless, and in memory of her created "Stories of the Sun" and wrote a song off the EP called "Sunflower" written about his fondest memories with her and his emotions that he has been battling since he lost her. Since the release Jason Masoud has began making a name for himself on Twitch where he live streams original music. He is now on a mission to make music his life, and is working hard everyday to make his dream come true.