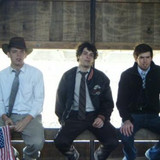 Tax formed in Noblesville, Indiana in summer of 2009 and moved to Nashville, TN in 2010 to create their first full-length album named "Atrocities on the Highway" produced and engineered by Grant Husselman.