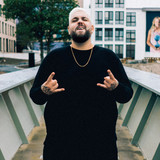 Does a gay former battle rapper, who’s been dabbling in grime, trap, boom bap and west coast, and now does pop music, exist? Yes, Big Daddy Karsten is very real, and the first openly gay rapper in Scandinavia is already a historic and household name in Norwegian rap. He was named one of the 300 most influential artists of the past 20 years by Rockheim (Norway’s national museum for popular music). In 2021 he made his mark on the Melodi Grand Prix with his love song "Smile" giving the mainstream a taste of love from a gay polyamorous perspective. "BDK" is as versatile as they come,

drawing inspiration from artists such as Busta Rhymes, Kevin Gates, Devlin, Jaykae, Drake, Flume, Sam Smith+++. He's played all the major pride festivals in Norway, as well as some of the biggest music festivals (Hove, Skral+++). Karsten’s life has been a rollercoaster; from crime and drug abuse, to sobriety and coming out of the closet, to a hungry Norwegian press sensationalising the fact that there where no other rappers quite like him in the country. Karsten lets both his masculine and feminine side shine bright in his music, and he's not afraid to let the world know exactly who he is. www.bigdaddykarsten.no