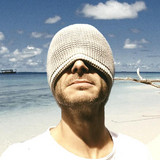 AN ENGLISH MAN EXILED TO FRANCE, FLOX MOVES CODES WITH HIS NU REGGAE REVEALED BY RADIO NOVA ! Flox's sound is recognizable amougst many others : a subtle blend of reggae vibes mixed with an electro sauce. It's an amazing bridge between the Jamaican tradition and the bustle of the English dub scene. As announced in his previous album “Taste of Grey", FLOX puts an end to a 12 year period of life which he would describe as “fundamental”. Today, FLOX finds himself facing a new challenge; a SOLO experience on stage. For the last year, he has been revisiting his flagship titles by performing live on stage as a one man band. A logical path for this multi-instrumentalist artist who has self-produced his six previous albums and who thinks that in any artistic field it is essential to put oneself in danger to stay fresh and inventive. We can therefore expect a more digital NU REGGAE from this artist, who being directly inspired by his new scenic vibration, should surprise us on stage as well as in his studio.