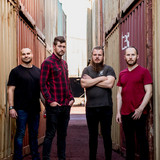 RISE IN RED is an alternative rock band from Bloemfontein, South Africa. The band is comprised of Dustin McCrindle (lead vocals & rhythm guitar), Jayson Reynolds (lead guitar), Jaco Novella (drums) and Pierre du Toit (bass). ‘In Between the Lines’ was released to all national and community radio stations in South Africa and has since received great success on radio playlists, even out of South Africa, hitting a number 1 slot on an Australian radio station. The single is a lead up to the band’s debut album, which is set to release 18 July 2019. The album, also titled ‘In Between the Lines’ delivers an ambient, emotive feel and deals with life’s challenges, but promises hope for a better tomorrow. RISE IN RED is a versatile rock band, whose music has a wide appeal. Coupled with the group’s messages of hope and upliftment, this album is sure to appeal to new and existing fans from all walks of life.