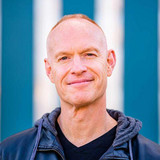 Classical style new age composer and pianist Jon Schmidt was born in Salt Lake City, Utah. His parents were German immigrants with a taste for classical music. Schmidt performed in piano recitals at the age of eight. Before he was in his teens, he began to compose music of his own, could easily play "Mozart Sonatas," and had appeared on stage with his musician father often. Schmidt's classical training lasted for over a decade. At 16 the roles changed, and he became a piano teacher. He was in his early twenties when he turned his full attention toward a musical career. In 1991 Jon Schmidt independently released a superb debut album, August End. After signing with Aubergine Records, he recorded a sophomore offering, Walk in the Woods, in 1993. It was followed a year later by A Day in the Sunset, Jon Schmidt Christmas in 1997, and then To the Summit in 2000. The latter was released under Schmidt's own label, JSP Productions. "Heart of a Child," "Winter Wind," "Song of the Ocean," "Waterfall," and "Homecoming" are some of the inspiring tracks new age fans will find on Schmidt's albums. He also performs live at many major concert halls, and has worked with a number of other artists, including David Arkenstone, John Tesh, Kurt Bestor, Lex de Azevedo, and Peter Breinholt. Besides his wonderful albums, Schmidt also writes sheet music and music books, such as New Age Classical Piano Solos, Vol. 1. ~ Charlotte Dillon, Rovi