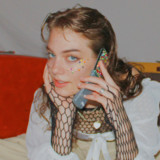 ig - @willasmae Willa Mae is in perpetual motion. Since her debut album Kids' release, she has stirred the local attention of her hometown Knoxville, Tennessee. Blank Newspaper defined the debut as “a piece of sonic art - a pop gem - and is potentially the best album released in Knoxville last year.” The whimsical, honest, and youthful singer/songwriter embraces the idea of do-it-yourself with open arms and rejects commitment to any one particular genre (although, an Appalachian influence is almost inevitable when born and raised in East Tennessee, especially if your parents are The Lonetones, a Knox-local indie mountain-folk band). At just 6 years old, Willa was a founding member of the band The Pinklets, until she gravitated towards making her own music, using SoundCloud as a creative dumping ground. She continues to delve into new territories and test her limits as she writes and records a sophomore album, where she’ll be exploring punk themes through a dreamy lens.