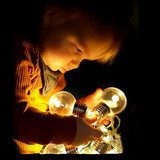 Born and raised in the north of Sweden on the shores of a small Paper mill village near the sea LIND spent his younger years dreaming of becoming a professional football player.